A Frog For Profit

This song is available on Frank Bruen's What About All This Business?

Child narrator explains what profit is.  The song is a funny fun tune about a kid who has a green jumping frog that he trades then buys and sells things and ends up with more money than he started with –his “profit.”

There once was a boy named Robin,
And he had a green jumping frog.
And all that Robin wanted,
In the whole wide world--
Was his very own wind-up dog.

He’d seen one sitting in the window,
In a toy store just nearby.
it’s price was a dollar and a quarter,
Had a sparkle in it’s eye.

So he traded his frog to a friend,
For a quarter and a new rubber ball.
Put the quarter in his pocket,
Gave another buddy a call.

So the Jack-in-the-box was his profit,
And he still has that wind-up dog,
Now he’s got two things he wanted,
After starting with a green jumping frog.

He started with a green jumping frog.

Book Suggestions for this song:

Many thanks to Frank Bruen for permission to display these lyrics.
© Frank Bruen. All rights reserved. Used with permission. 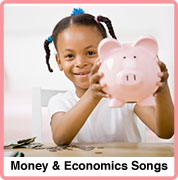