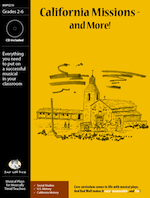 Flexible casting from 11-40 students.
Use as many Administrators, Wives, Californios, etc. as desired.
One student can easily play several roles if needed. Note that all roles
can be played by either boys or girls.

(Lots of people are busy on a movie set. They are moving things around,
rushing back and forth. There is a director’s chair that says, cleverly enough,
"DIRECTOR" on the back. The Director, JB, enters, with her assistant
JOHNSON, who always carries a clipboard.)

JB (shouting out directions, perhaps clapping hands to get attention):
Okay, people, let’s get moving. We’ve got a movie to film and we’re
already behind schedule.

JOHNSON: We’re all set, JB.
(to CAST and CREW of movie)
Your heard the director. Scene One of JB’s most brilliant work,
"California Missions."

JOHSNON: What is it, JB?

JB: That title. California Missions. It’s so, so…

JB: Icky. It’s icky. It needs something more.
(Thinks for a second, and then a lightbulb goes on over her head)
I’ve got it! Johnson, I’m a genius.

JOHNSON: What is it?

JB: The new title of my movie:
(pause: emphasize the “and more”)
California Missions—and more.

CLASS (sings):
We’re gonna make a movie ’bout the Missions
The kind of film our fans will all adore
Yeah it’s got grit and luster
A holiday blockbuster
California Missions—Missions and more.

JB:
As long as it is my way

(JB takes her seat in the Director’s chair. The set clears. Three NATIVE
AMERICANS enter. Note that the gender is important for two of these
characters.)

JOHNSON: Okay, Scene One. It’s the sixteenth century, before the
Spanish start exploring California. Where are the Indians?

NA #1 (female): Thanks. But you really shouldn’t call us Indians.

NA#2 (male): That’s right. There are hundreds of thousands of us
throughout the west coast, and we belong to dozens of different tribes.

NA #3: Hey, has anybody seen my acorns?
(looks around, panicked)
I think I’ve lost my acorns!

NA #2 (pointing): Is that them in that basket over there?

NA #3: Yes! My acorns!
(races over and grabs basket)
I love acorns. Little ones. Big ones. Some of them get these cute little
lines on them and look just like they’re smiling. See? There are fourteen
different varieties of acorn in early California. Would you like me to name
them?

JOHNSON: No! I mean, we’ve got to shoot this scene. Are you all so, uh,
fond of acorns?

NA #1: No. That’s the point. We live in all kinds of places and live all
kinds of lives.

NA #1:
Some of us make baskets

NA #3:
Some of us wear deerskins

NA #3:
I live in the mountains
Near an acorn tree!

NA #1:
Some of us pick berries

NA #3:
Some of us find acorns
What a nutty dish!

JB: Cut! Brilliant. Perfect. It’s got a message but it’s catchy. And there’s
the food angle. I’m not a big fan of acorn porridge myself, but I think there
may be an untapped audience out there of nut lovers. Johnson—get me
on one of those cooking shows for the publicity tour.

JOHNSON: Right, JB. Okay, Scene Two. We need Joseph de Gálvez
on the stage. Where is the Spanish Visitor-General of Mexico?

GÁLVEZ: (entering, accompanied by ADMINSTRATORS. HE is holding
a letter):
At last my request has been granted from the king. We shall send an
expedition to Alta California and colonize it for Spain.

ADMINISTRATOR #1: Excellent, Governor Gálvez. But we Spanish have
claimed all of California for 200 years. In 1542 Cabrillo sailed to San Diego,
and in 1602 Vizcaíno charted Monterey Bay. Why send an expedition now
in 1769?

ADMINISTRATOR #2: But how do we do it?

GÁLVEZ: How? How we always do it, of course. We’ll follow the famous
Spanish three-step plan to territorial expansion.

ADMINISTRATORS #1 and #2 (together): The three-step plan?

GÁLVEZ: Don’t they teach you anything in college these days? Your
résumés explicitly stated that you had taken Imperialism 101: Introduction
to Being a Colonial Power.

ADMINISTRATOR #1: Uh, I think I may have missed a couple of those
classes.

GÁLVEZ: The three-step plan of expansion is quite simple. Repeat after
me: Missions.

ADMINISTRATORS #1 and #2 (together): Missions.

ADMINISTRATORS #1 and #2 (together, baffled): Presidios?

GÁLVEZ: Presidios are forts. And the third step is pueblos. Pueblos are cities.

ADMINISTRATORS #1 and #2 (together): Pueblos.

GÁLVEZ: All together now.

GÁLVEZ: Now you get it.

Then we’ll fortify that mission
With presidios positioned
To discourage opposition
To our California quest.

You might call it colonizing
But we’re really globalizing
Though the natives are down-sizing
In the end they’ll like the plan!

JB (from chair): I love it. It’s got pathos. I don’t even know what pathos is,
but I know that scene’s got it. Keep rolling. Cue Junipero!

SERRA: It is a miracle, Captain Portolá. I thought our overland trip here
from Mexico was difficult, but it was even harder for the ships. We are
fortunate that more of us did not die.

PORTOLÁ: True. But we have now established a Spanish presence in
San Diego and Monterey.

SERRA: And someday we will have missions and pueblos up and down
California along El Camino Real, the King’s highway.

PORTOLÁ: Perhaps you too will be famous one day. Children will study
Father Junipero Serra and his missions.

SERRA: Ya think? Naaaaah. Wouldn’t that be horribly boring? I am just
a humble Franciscan friar doing my best to serve as I can.

PORTOLÁ: The mission is almost finished. Soon we will hang up the bells.

SERRA: Ah, I love the bells. They have traveled a long distance to become
part of our little mission. Our building is modest now, but someday it will
rise up with tall brick walls. The ringing of the bells means our work here has
just begun:

I love the smell of adobe
Drying in the sun
The walls are rising
Let’s start baptizing
Our mission has begun.

PORTOLÁ:
I love the sight of a cornfield
Furrows deep and straight
The grain is rising
So civilizing
Our mission’s taking shape. 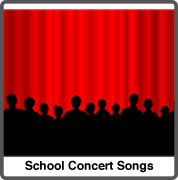