How Democracy Came to the Beehive 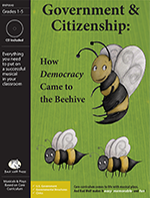 Flexible casting from 11-40 students. Use as many Bees, Attendants, Squirrels, etc. in each scene as desired. One student can easily play several roles if needed, and individual roles can be doubled up. Note that roles can be played by either boys or girls; see our comments in the Teacher's Guide.

and a CHORUS composed of all students who are not playing roles on stage at the time.

(This is the first one-third of the script.)

Some monarchies have kings, but that is not for us
You may prefer a prince, but they are such a fuss!
And do not mention dukes or we just might get miffed
And a princess is a princess, if you get my drift.

If you ask a bee we'll tell you:
We love our royalty!

A monarchy they say is quaint and out of date
But we're content with having just one head of state.
And that's the way it is and how it always was
If someone asks the reason, tell them here's the buzz...

If you ask a bee we'll tell you:
We love our royalty!

CLASS:
I guess we simply mean
Long live the queen!

(QUEEN arrives with her ATTENDANTS. The BEES all give way, perhaps kneeling or bowing.)

ATTENDANT #2: Attention. The Queen has a very special message.

QUEEN: My fellow bees. It has been my great privilege to have you serve me. But I come here today to announce my retirement.

(General concerned Bee-buzzing; during this we hear in quick succession:)

QUEEN (putting out her hands, calming down her subjects): Please, calm down. Î™ know this may sting a bit. But I've devoted my life to you -- now it's time for me to find myself.

ATTENDANT #2: And she NEVER gets out of the hive.

QUEEN: So I'm following my dream -- I'm moving to Florida. [NOTE: You may actually live in Florida. Feel free to substitute the destination of your choice.]

QUEEN: You know, you've always had a queen. Maybe you should try something different.

BEE #7: Something different? Like making chocolate syrup instead of honey?

QUEEN: No. I mean like a different form of government. Something besides a monarchy.

BEE #9: There's something besides a monarchy?

ATTENDANT #1: Sure. We just have to decide how we want to organize the hive.

ATTENDANT #2: Yeah! Who do we want to make the rules?

QUEEN: Exactly! It's up to you to decide!

Who
Tell me who
Makes the rules?

If you had a dictator he'd tell you what to do
You wouldn't have to vote or think or have a point of view.
A radical democracy could also be quite fun
The people vote on everything and nothing much gets done.

Who
Tell me who
Makes the rules?

A monarchy that's limited would be a compromise
A constitution cuts the regal powers down to size.
Great Britain has this system where the royalty are grand
They cut a lot of ribbons and they own a lot of land.

QUEEN: As my last act as your queen, I will create a committee to explore the different possibilities of government for the hive. When you have come to your decision, you will need to get the final word from the Great Guru.

BETTY BEE (jumping up and down, raising her hand): Ooh, ooh, pick me, pick me for the committee! I have a LOT of ideas.

BETTY BEE: Like, what if we take every wild and crazy political idea we can think of and try them out one at a time?

QUEEN: That's been done, my dear. It's called Berkeley. I was thinking of Bonnie Bee and Billy Bee, since they have always wanted to have positions of leadership.

BETTY BEE: You could choose me too! I really want to help!

QUEEN (to ATTENDANTS): What do you think? Should we add a bee?

ATTENDANT #2: Two bees or not two bees -- that is the question.

QUEEN: Very well. Bonnie, Billy, and Betty -- you are the committee to form a new kind of government for our little state. Good luck! I'm off to Miami Beach.

BONNIE: I think I should be chairman of the committee.

BILLY: Who said there was a chairman? But if we do have one, it should be me. I'm the oldest.

BETTY: Why don't we go by colors?

BETTY (gazing off into the distance): I meant the colors in our hearts.

BILLY (trying to move on): Uh, yeah, well, let's just try to get started. To be honest, none of the government options sounded all that good.

BONNIE: I know. Except for the dictator. With the RIGHT dictator, of course. (SHE touches her chest, indicating the "right" choice.)

BILLY: Well if it isn't the Spider brothers.

SPALDING: We heard the queen told you all to buzz off.

SPENCER: Yeah, you bees just keep droning on and on about it.

BILLY: It's a big change for us, but we're moving forward.

BETTY: And staying positive! We're going to invent a new form of government -- maybe something based on types of fruit.

SPALDING: Fruit? No. You don't need to invent anything new. And you don't want another queen or a king or a dictator.

BONNIE: But if we had the RIGHT dictator...

SPENCER (shaking his head): Naaah. What you want is a democracy.

BILLY: But we have too many bees and we're too busy flying around collecting pollen. If every one of us had to vote for everything, we'd never get anything else done.

SPALDING: You're right. But we're not talking about a direct democracy, which is also called a radical democracy.

SPENCER: He's right. That's what they had in ancient Athens, way back in the fifth century BCE, and look what happened to them...

SPALDING and SPENCER: They're all dead!

SPALDING: What you need is a representative democracy.

SPALDING and SPENCER: Oh, it is!

In a representative democracy
Elected folks create most policy
And the senators and congressmen all work in harmony.

SPIDER BROTHERS:
In a representative democracy.

You get to vote directly every now and then
That's great because your voting power expands
It's yay or nay on dozens of initiatives
And ballot measures no one understands.

SPALDING (spoken): But you get to vote anyway!

In a representative democracy
Elected folks create most policy
And the senators and congressmen all work in harmony.